As I mentioned in Physical Fitness Program 2021-05, the stress eating of the pandemic caused me to put on a good 10 pounds. I was already a little bit over where I wanted to be.

In response, I've started on the WW Purple plan, with the goal of getting under 160 lbs. I've used WW in the past, along with several other weight loss methods. They all work effectively. Some are more nutritionally balanced than others.

The main difficulty with weight loss is sustaining it. Every time I lose weight, I regain it, sometimes frighteningly fast. But I've reached an age where I really need to keep it off, because it's getting harder to lose.

I've essentially lost the same 15-20 lbs. repeatedly over the decades. Now my goal is to lose it and keep it off, learning from the mistakes of the past.

What's different this time? This time I'm focusing on permanent dietary changes, not just being "on plan" and then going "off plan" when I've hit my goal.

It's that "off plan" part that's always the problem, where I no longer maintain the discipline and dietary restrictions that enabled me to lose. You might say "wild abandon" in some cases, since I have what could be considered an addictive response to sugar.

What I like about WW is that it's extremely flexible. You can literally eat anything, as long as you manage the portions and track it so that you stay within overall limits.

WW assigns "points" to each food (these days called "smart points") based on nutritional information. Some foods are zero points ("free foods"), in order to encourage you to favor these over others.

WW offers three color-coded programs, Green, Blue, and Purple. Each one has a progressively lower points limit, and larger free foods list, allowing you to choose based on personal preference and self-discipline.

I've already made some long-term changes that are consistent with WW, especially with the Purple free foods, by focusing on a primarily plant-based diet.

Both are very consistent with WW, as are the books I've listed in Changing My Diet To Plant-Based.
Kwik's top 10 brain foods, in alphabetical order:
Naidoo's recommended foods, in alphabetical order:
Note the similarities, providing cross-correlation of recommendations. All items should be in reasonable, moderate amounts, and watch out for unhealthy additions and condiments to dress them up! Just because a food is listed doesn't mean it should be eaten in large amounts.
Naidoo's list is longer because that's the whole focus of her book. She breaks down the benefits for various brain- and mood-related conditions.
She includes both probiotic items (fermented foods such kimchi, miso, kefir, and yogurt) and prebiotic items (high-fiber foods such as beans and other legumes, oats, bananas, berries, asparagus, garlic, and onions). Probiotics are live bacteria that convey health benefits through the gut microbiome. Prebiotics are essentially the food for the prebiotics.
She also recommends foods high in omega-3 fatty acids (while reducing omega-6's), various vitamins and minerals, and beneficial compounds in various spices.
She highly recommends the Mediterranean eating pattern, consistent with the Blue Zone findings. She also recommends avoiding many of the foods of the typical "Western diet," i.e. the typical American diet. These include sugar, other high-glycemic index foods, saturated and trans fats, fried foods, and large amounts of red meat.

The Results So Far

I weigh myself every day. WW recommends not doing that; they recommend just weighing once a week, since it constantly fluctuates. But I want to see those fluctuations, just out of curiosity. For consistency, I weigh first thing in the morning after getting out of bed and going to the bathroom.
This graph shows my results. Notice how jaggy it is, showing the daily fluctuations. Weighing weekly would smooth that all out. 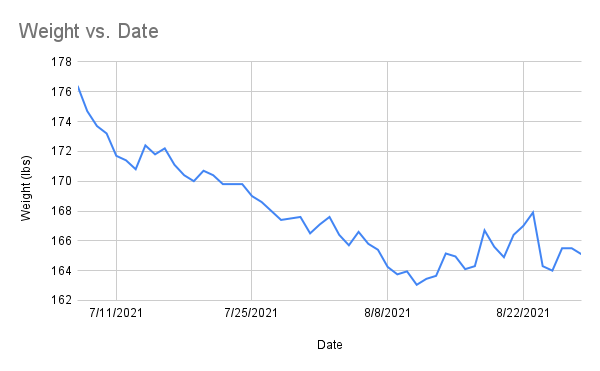 What happened in August? My son and his girlfriend came to town for a week for a wedding. We ate bad stuff and too much of it, peaking on the 23rd, two days after they left. But then once I got back on plan, I started recovering my progress quickly. Some days show multiple pound changes!
My experience with past weight loss was that any time I went off plan, I averaged about half a pound a day weight gain. The key to dealing with that is to stop and allow my body to recover. So I can afford an occasional setback as long as I don't let it go on too long and don't let it break my regimen.
WW also emphasizes "non-scale victories," i.e. what else besides the numeric weight loss. For me, all my clothes that had stopped fitting now fit again. I was down to 2 pairs of pants that I could wear comfortably, and most of my T-shirts were too tight. Now all my pants and most of my T-shirts fit.
Here's another interesting victory: I've stopped needing Tums. Before I started WW, I generally needed a couple of Tums at least once a day to deal with heartburn. Shortly after starting WW, the heartburn stopped.
I attribute this primarily to not constantly overeating. I think being overly full too much of the time was causing my heartburn.
I looked up the points for a number of things I'd been eating previously, and it turned out I'd been eating two or three times my daily points every day. So I'd been significantly overeating on a regular basis. No wonder I'd been gaining weight!
Overall, I'm losing about 1.5 lbs per week. That's a good, sustainable rate. Once I get below 160, I'll adjust to maintain that level.
I'll be posting recipes for the things I've been eating, leaning heavily on the above food lists. In some cases, I'll list specific brand items, because I've found them to be combinations of good flavor and lowest point choice.
Posted by Steve Branam at 6:27 AM

Email ThisBlogThis!Share to TwitterShare to FacebookShare to Pinterest
Labels: Diet

Steve Branam
I'm a software engineer and woodworking hobbyist in central Massachusetts. "Hobbyist" means I'm free to spend unlimited amounts of time, energy, and money without expecting any return on my investment. I'm a firm believer in see one, do one, teach one. You can find my book "Hand Tool Basics" at Amazon and other booksellers.